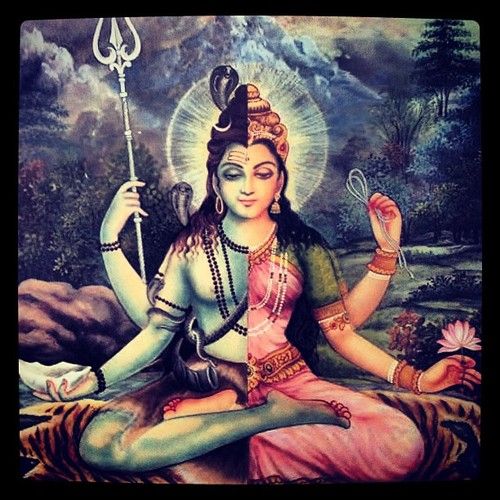 As a meditation on Shiva and Shakti I have collected Some pieces from the Shiva Mahapurana as translated by Mataji Devi Vanamali. #love #balance #Shiva #Shivaa #Shakti

Bramha was unhappy that Shiva had reprimanded him for Boring sexual feelings for Sandhya. Shiva’s lack of understanding about sexual feelings originated from the fact that he was a yogi and had no knowledge of women or passion in order to make him suffer the Pains of Love. Unless the primordial being Shiva Indulge in sexual sport , creation would continue to be mediocre, for Shiva is extremely detached.
—
After failing in his attempt to send Kama to arouse lust in Shiva he consulted Vishnu. Vishnu smiled and said Oh brahma how is it that this illusion has befallen you? Do you not know that Shiva is Maha Yogi, free from all illusion, ever immersed in the Bliss of the self if you really want Shiva to marry then you will have to pray to Shiva himself. you know his Shakti is part of him Shakti is his feminine counterpart and is known as shivaa. if the goddess takes human birth she will definitely become his wife for she is a part of him.
—
As soon as Vishnu left, bramha began to meditate on Shivaa. The goddess both knowledge and ignorance. She is nothing but the Supreme Brahman. Pleased with his penance the goddess Durga appeared before before him. she was dark as night and had four Divine arms one of which carried the blue lotus and the other sword the third was raised in the moods of blessing. Her eyes were dark and lustrous and gleaned like the pearls that adorned her disheveled dresses. The Mystic third eye on her forehead was closed. She was as beautiful as the Autumn Moon, and the Crescent Moon bedecked her broad forehead. She was Seated on a magnificent lion that gazed at her lovingly with its Tawny eyes.
—
“Oh Godess, the great God Shiva, who has manifested himself as rudra through my forehead is now residing in the mountain. he performs Penance all alone and refuses to take a wife. You are his eternal shakthi. He is Lord of yoga and cannot be tempted by any woman. But as you know, the path of yoga, or restraint, has to be balanced by the path of Bhoga, or pleasure. You alone in the entire world are capable of exciting Lord Shiva, oh mother of the Universe, I pray you be born and bewitch the Lord who has totally detached from worldly life.” The goddess agreed to his request and after blessing him, she vanished from View.